Training dogs to do just about anything is so much fun!!!!  They (as well as us) learn so well through games!  Today, Da Vinci continued to play the “fetch” game with me…and with an interesting blip.  He ran after the toy as I said “fetch”…picked it up and started back…got distracted and dropped the toy, but continued to trot toward me…as he arrived about 5 feet from me, I threw my hands up as if to say “where’s the toy?”…without my saying a word, he paused to think for a moment and then went back to the toy which was a good 20 feet away…he brought it right to my feet.  What a little thinker.  I love that!  It’s amazing what can happen when you keep learning fun, allow them to think and make decisions without us barking orders at them!!!!!!!  We followed that game with a chase & tug game…letting him figure out that eye contact would earn his release to get that exciting toy…then we would tug with it, practicing our “outs” and “take its”.  Prey drive is an amazing motivator and a powerful tool…which is why it is so important to also practice self control during these games.  Harnessing prey drive is a delicate balance.  It’s an incredible display of nature!

Speaking of prey drive, Callie got some nice practice at indicating her “find” today.  She searched the house for a treat that I secured in a container with holes in the top.  Since she couldn’t get the cookies out on her own, she had to indicate the find somehow.  She’s figuring it out and fluctuates between pawing at it or pouncing at it.  With more and more practice, she’ll probably pick just one of those as her indicator.  Until then, I’ll let her choose.  Thankfully, she is moving better today.  In fact, it’s been challenging to get she and Da Vinci to cool it.  She was very sore yesterday from her swim lesson two days ago.  I was really discouraged last night…hated seeing how slow her recovery is going to be.  It is very possible she won’t be making a return to agility until February or March.  I was hoping she wouldn’t be so stiff, but it is what it is.  I need to keep my head, not my heart, in control of her rehab and reconditioning.  I have the tools and knowledge to keep her safe with extensive personal and professional experience managing injuries in humans…especially cruciate injuries.  I KNOW what I am seeing in her is to be expected…but I still don’t like it.  One step at a time :)!  In the meantime, she will, no doubt, master the art of truffle hunting!  It might be time to introduce the truffle odor soon!

What a delightful surprise! 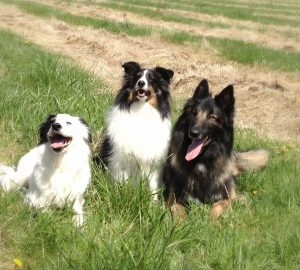