It’s time I updated our blog! So much has happened since I last posted and I’ll get to all of that at some point. Now, and perhaps more importantly, I want to share where we are now. Today, I realized something. I realized that THE story that once was the story defining Callie and I, is no longer OUR story. But let me back up…

Some of you may know that we are finding truffles regularly now and that for this first season of reliable hunting, we are selling our dog found truffles as a fundraiser to attend Cynosport 2013 for agility. Cynosport will be the biggest agility event my dogs and I have been to and I’m very excited to have the opportunity to go! We are also doing land surveys for donations and today we had our first one. We were accompanied by a colleague and friend with her 3 dogs. Add in mine and it was a total of 6 dogs. There were some observers present too. Five to be exact. As I got Callie out of the car, she raced to the field where the property owners and observers waited and proceed to wait for direction from someone. In hindsight, I realize this was a huge milestone. I’ll explain later. My friend, Alana, got her dogs out one by one and I sent Cash and Da Vinci into the field to run off some steam after a long drive. Here we were…6 dogs and 7 humans gathered in the same space. This as well became significant as I reflected on the day.

Once the dogs had had sufficient exercise, we put all but two dogs back in the cars. Callie and Lolo would do the land survey together while the property owners and observers followed along. Everything went great! The dogs were working well and lots of great questions were being asked. Although we only found truffles that weren’t “keepers”, I’d still call it a success. The girls kept working and covered the property. If there were a black or white truffle, they would have found it! Many questions came up during the survey. One of them was how we got into truffle hunting. I explained how Josh and I had been to Italy in the summer of 2010 and fell in love with truffles. That we joked about needing truffle dogs. Then, in a random internet search, discovered that they grow right here in the PNW. The Adventure began. Callie sustained an agility injury that would keep her out of the sport for 7 months so it was a great time to begin learning a new skill. Truffle hunting became part of our journey to recovery (in more ways than one).

As we gathered for discussion back at the car, Callie proceeded to engage with anyone who would indulge. There’s always one victim to her ball obsession mode. Always. So she spent some time playing with a stranger. The land owner was very generous with her donation which made us feel good about the information we were able to share on the foray.

As I drove home, I realized that there was a part of the story I forgot to tell. A part that used to be significant but no longer is. A part that defined us as a team. I forgot to tell these people we met with that Callie had (and still does to a lesser degree) some fear she copes with. That she used to growl at people and other dogs. And yet here she was, playing in a large group of dogs, interacting with a large group of people, working side by side with another truffle dog team and engaging strangers in play.

I realized that THE story I had forgotten to tell. I FORGOT! And I’m thrilled that I did. That story defined us for a very long time. It defined our relationship, our actions and our decisions to or not to participate in activities. Everything changed for “US” during Callie’s injury time off. We connected in a way that we hadn’t before. As we went back to training agility, my attitude and energy were different. I no longer tried to control her behaviors. I respected them and gave her what she needed. If she wanted space, I gave her space. I always protect her space and can tell when she is becoming uncomfortable. Today, no one could have suspected that we once had challenges and I forgot THE story. So the magic happened. The magic of allowing THE story fade away…no longer to define us. It feels good! It feels great to be in this place with Callie…respecting that we have come so far and knowing that where we are is WHO we are. And that’s what matters. So, I guess you could say that this truffle hunting adventure has brought us much more than the truffles we find and the friends we make. It has reached beyond that to redefining relationships and encouraging our spirits to blossom in a new way with the world and with each other. For this I thank the fungus!!!

Callie, you are my Superstar! 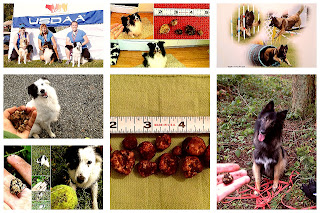 Hi, Everyone. I’m selling the truffles my dogs find as a fundraiser for Agility Nationals (Cnynosport) in TN. We hope to continue harvesting well into March and April. $20/ oz. for Oregon Whites. Please message me for pricing on Oregon Blacks as these may vary. All prices are near wholesale! If you know anyone who might be interested, please forward this info. I can ship.
WE are also offering to do local land surveys of properties with Douglas Fir on them for a donation. If you are curious as to the presence of truffles on your land, contact us.
Contact me on Facebook Kristin Sims Rosenbach and Wagnificent K9 Truffle Dogs or by EMAIL