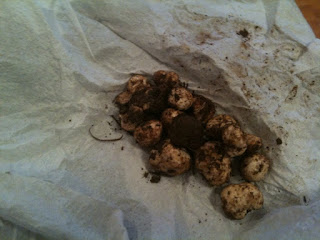 The lesson went great…after the olfactory assault of opening the box!  The aroma of these gems is intense, offensive, enchanting, euphoric and addicting…and gives me a headache!  I took Cash and Da Vinci to the lesson.  Callie is still on restricted activity and would be TOO excited to focus so she had to stay home.  Cash worked during the lesson and I learned how to introduce each of the dogs to our “scent source”, accommodating for their motivational differences.  All three dogs begin with scent boxes…learning to associate their reward with the box containing the truffles.  For Cash, it was a click and hot dog reward for “hitting” on the correct box.  For Callie, the truffles get paired with her squeaky ball.  Da Vinci will start with the clicker & food reward and possibly transition to a toy later.  In these beginning stages, the goal is to get them familiar with the scent, associating the pungent truffles with a reward, learning a verbal cue and possibly finding an “indicator” behavior.  By the end of the session, Cash offered a down, looked back to me or pawed at the box…we will see which he chooses.  After our lesson, we made the 35 minute drive home…which felt much longer being trapped in the car with the foul, yet intoxicating fumes.  I introduced Callie and Da Vinci to the truffle scent at home and they did their first scent box exercise.  Callie initially thought I wanted her to POUNCE on all containers she came across, but eventually realized that they did not all produce praise and her squeaky ball…then started to use her nose.  She is a smart, motivated girl who finds great satisfaction in working.  Her face said it all when we were finished!  We will see how she does tomorrow!  Da Vinci was very thoughtful and a bit too focused on me so the clicks and rewards probably seemed a bit random to him…but I have a suspicion the game will look much different with him tomorrow.  He is a thinker and may show a whole different understanding once he has time to process this new game.  On his last exercise, he really put his nose to work…was it an ah-ha moment or a random coincidence?

While we have the truffles (7-12 days before they deteriorate), we will train hard.  Another lesson is set for Sunday.  Before then, I hope to establish a verbal cue and clear understanding of the scent they are searching for.  Until then, we will celebrate the launch of our grand adventure with a very appropriate selection of wine. 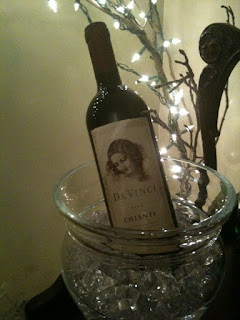 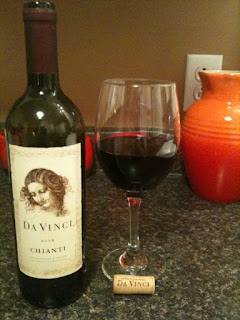